Courtesy of the Alliance to Save Energy
Author: Miriam Berg

The federal government’s energy efficiency standards for light bulbs are expected to save Americans money on their electric bills and make it easier for them to choose the type of lighting they want, according to several energy and lighting organizations. “We want to make sure that consumers know about the transition to efficient lighting and embrace the new technologies being offered by the lighting manufacturers,” said Gail Hendrickson, the Alliance’s executive vice president for external communications and operations. “Efficient lighting products will reduce energy use nationwide and have a positive impact on the environment.”

California put the new standards in place at the beginning of this year, and they will spread across the United States in January 2012. At that time, light bulb manufacturers will be subject to minimum requirements for the amount of light emitted per unit of energy used in general service light bulbs. By 2014, the old fashioned, energy-hogging bulbs that have remained unchanged for decades will gradually be replaced by many more energy-efficient, cost-effective options throughout the United States.

Out with the Old…

Despite exponential progress in technology, the incandescent light bulb has sustained its form since Thomas Edison designed it more than a century ago. Now, the United States is catching up to several countries around the world that are transitioning to more efficient lighting.

Just what are lumens?

Lumens measure the amount of light emitted by a bulb. The higher the number of lumens, the brighter the bulb. For instance:

With new light bulbs, gauging lumens will be more relevant than watts when choosing which bulbs to purchase.

The U.S. lighting transition is part of the Energy Independence and Security Act (EISA), which requires manufacturers to develop light bulbs that produce the same amount of brightness (lumens) with less energy (watts). The more stringent standards mean incandescent light bulbs must become at least 28 percent more efficient. In other words, the everyday, 100-watt bulb will have to produce the same brightness by using just 72 watts.

Because most incandescent light bulbs cannot meet the new energy efficiency requirements, they will dwindle from store shelves. However, the regulation does not “ban” any particular bulb.

“The standards are ‘technology neutral,’ which means that no specific type of light bulb is being banned. Instead, EISA sets a performance standard that requires light bulbs to generate a specific amount of light for a certain amount of energy used,” explained Department of Energy Deputy Secretary Jen Stutsman.

But the standards also support lighting options that are vastly more efficient than incandescents could ever be.

… In with the New

Far from limiting options on lighting, manufacturers and retailers are offering modernized incandescent light bulbs and brand new, high-efficiency options for homes and offices that reduce energy and cost, according to American Lighting Association (ALA) Communications Director Amy Wommack.

“Many of these products have a payback from a financial standpoint, which means that their somewhat higher initial cost is paid back to the purchaser over time by energy and maintenance cost savings,” Wommack said.

The increased variety of energy-efficient lighting options include halogens, light-emitting diodes (LEDs) and compact flourescent lamps (CFLs). Most applicable for homes, CFLs use one-fourth the energy that traditional incandescents use to provide the same amount of light; CFLs also last 10 times longer and come in a variety of lighting colors and dimming options.

“The lighting choices consumers will have … after the new efficiency standards take effect will provide consumers with increased energy savings. However, some consumers may not be familiar with the new lighting choices and should understand which light bulbs meet their particular needs before purchasing,” said National Electrical Manufacturers Association Government Relations Manager Justin Neumann. 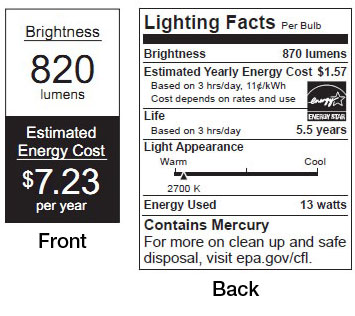 In addition to EISA’s raised efficiency standards, the U.S. Federal Trade Commission will require manufacturers of incandescent, CFL and LED light bulbs to use new labels on consumer packages starting in summer 2011. For easy comparisons between light bulbs, the front of each package will feature the bulb’s brightness measured in lumens and yearly energy cost. The back of each package will feature a label similar to Nutrition Facts on food packages. In addition to brightness and energy costs, the Lighting Facts label reports the bulb’s wattage, appearance (such as “warm” or “cool”), mercury content and a link to instructions on safe disposal.

“When purchasing light bulbs, consumers will need to understand how many lumens they need, and look for that number on the package instead of making decisions based on wattage,” said ENERGY STAR Brand Manager Maria Vargas.

These new packaging requirements will change the way Americans refer to light bulbs, according to the ALA. So, instead of buying a “100-watt” light bulb, people will soon buy a “1500-lumen” light bulb.

On the Bright Side

Many Americans welcome the new energy-efficient lighting, according to a survey by OSRAM SYLVANIA. The study found that more than half of Americans have already started installing CFLs in their homes and plan on switching to efficient lighting by 2012.

These first adopters stand to save the most: On average, American households will save $143 on their electric bills each year after transitioning to efficient lighting, according to NEMA (dollar figure based on average number of sockets per household and assumes use of incandescents only pre-transition).

Moreover, during the next 30 years, the new lighting standards are estimated to save the amount of energy it would take to light every U.S. home for 19 years under current standards, according to the Department of Energy’s Stutsman.

The transition also will be gradual, occurring in three phases:

“These increases in energy efficiency will save American families and businesses billions of dollars a year, while dramatically reducing carbon pollution across the country,” Stutsman said.

As more efficient lighting becomes the norm, consumers can expect efficient light bulbs themselves to become more economical. Already, prices for CFLs have decreased from $10 – $15 per piece to $2 – $3 per piece, according to ALA’s Wommack.